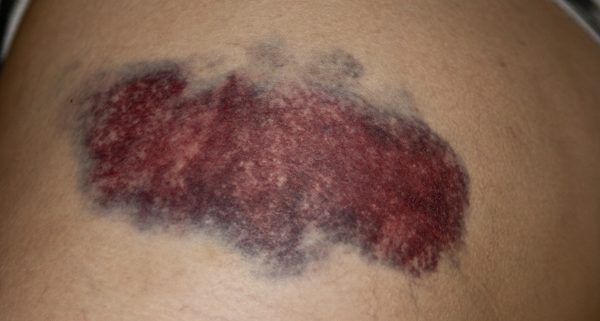 This is a bruise and is caused by an impact with a hard object or pressure that causes the blood vessels under the skin to burst and blood to leak out into the cellular space. Typically appears as a range of colors in a localized area on the skin. Current literature states that bruises cannot be reliably dated. They can be “patterned” as is commonly seen in a slap to the face or fingermarks from grabbing.

The most common question I am asked is whether or not you can date bruises. The short answer is no. Many experts will still attempt to date bruises based on color, tenderness, and/or swelling, but the literature shows that this is only accurate between 30 to 50 percent of the time.

Other studies show varying ages based on color:

Note: All of the studies mentioned were focused on children, there are other studies available for all ages.

Was Junk Arson Science Used to Convict a Mother for Killing Her Own Daughte...