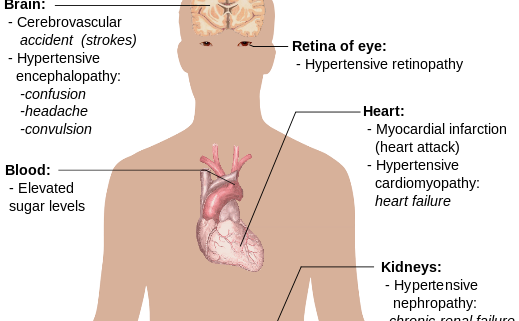 In April, Tara Godoy covered delirium and noted that there are many underlying etiologies that can cause it. One of those etiologies is a condition called hypertensive crisis, or more specifically, hypertensive encephalopathy. If you have a patient that is treated for hypertension in the course of their arrest, you may need a medical expert to review the records and determine how that state affected their mental status.

Guidelines for blood pressure treatment are set by the American College of Cardiology and the American Heart Association. The most recent guidelines were published in November of 2017. They are as follows (ACC, 2017):

What is Hypertensive Encephalopathy?

When the blood pressure reaches a level that the body can’t compensate, the result is cerebral edema. The excess fluid in the brain results in pressure and a lack of perfusion to the brain tissues. The brain cells then fail to operate normally, and some begin to die. The patient will often complain of a headache or visual changes, but they may become delirious, confused or have seizures.

How Does This Relate to Criminal Cases?

If the patient is in a state of hypertensive crisis and hypertensive encephalopathy has set in, it is possible that confusion will manifest into agitation and aggression. In addition, any person in a delirious state may be unpredictable in their behavior. Hypertensive encephalopathy does not typically present suddenly; rather progressing over 24-48 hours. It will also not resolve on its own – treatment is necessary to prevent stroke and/or death.