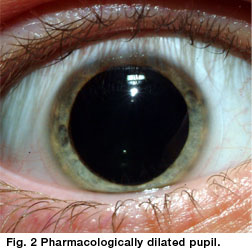 Methamphetamine use has physical manifestations that heighten suspicion of use and lead to a drug screen. The category of stimulants, which includes methamphetamine, methylphenidate, and cocaine, all produce dilation of pupils and the pupils appear abnormally large. Unlike sedatives, stimulants do not cause gaze nystagmus (jerky eye movements that become apparent when a person looks to the side). Methamphetamine can cause rapid heart rate, sweating, elevated body temperature, tremor, and twitching. Research on the ability of standard field sobriety tests to detect amphetamine found that low levels of stimulants did not impair performance on the standard tests (Silber, 2005). An observer may see signs and symptoms strongly suggestive of stimulant use, but it is not possible to definitively identify stimulant use without a chemical test.

Methamphetamine is typically detected through urine and blood screens that offer positive or negative (“qualitative”) results. A positive result on a screen often leads to a confirmatory test that will use more sophisticated laboratory tests which can quantitate the concentration of the drug and drug metabolites.

Interpreting screening and confirmatory testing results can be complex as a result of test cut-offs and patterns of use. Urine is most frequently used for screening because it is less invasive to obtain than blood samples. Also, the kidneys filter and concentrate chemicals during the excretion process. As a result, urine tests can detect substances that may have much lower concentration in the blood.

Blood concentrations for methamphetamine use as a prescribed medication are typically in the range of .02-.05 mg/L for a person taking methamphetamine prescribed for attention deficit disorder, weight loss, or narcolepsy. Drug abuse with methamphetamine yields blood levels as low as .01 mg/L and 2.5 mg/L. Levels above 3.0 mg/L have been documented and are associated with significant risk of toxicity. Some laboratories report drug concentrations using different units such as micrograms and milliliters. Online search engines offer converters that will automatically convert units and allow for direct comparisons of levels.

Compared to cocaine, methamphetamine’s effects can be more intense and last longer. The half-life for methamphetamine (the time period required for the body to decrease the blood level of methamphetamine by 50 percent) ranges from six to twenty hours.

The time window for detecting methamphetamine will depend on both testing factors and individual factors. All screening and quantitative tests have a lower limit, or cut-off, for detection. This limit varies for tests and among labs. If a person had used methamphetamine many hours prior and the concentration was very low in the blood or the urine, a qualitative test may come back as negative. Quantitative tests may also result in negative results if the amount in the sample was below the lab threshold for a positive report. Very sensitive tests, with much lower cut-offs for concentrations, will detect the presence of methamphetamine and amphetamine sooner and for a longer period of time than less sensitive tests. Laboratories will inform you of the lower limits by either including the cut-off level on the written report or through a personal communication.

The method by which methamphetamine is consumed will also impact detection time. Intravenous use will have almost immediate detectable methamphetamine in blood samples and in the first void after use. Oral ingestion of methamphetamine requires absorption through the GI tract and requires a longer period to detect the drug. Peak blood levels occur three hours after an oral dose. Urine tests may require 12 to 24 hours to test positive.

The duration of detectable of methamphetamine and amphetamine in blood or urine can vary due to several factors. The half-life will be shorter if a person has acidic urine; the kidneys will clear the drug faster when urine is acidified. This has led to the marketing of acidifying products, such as vitamin C supplements, to people anticipating a urine drug screen.

How Reliable is Forensic Science?

Can Sudden Infant Death Syndrome (SIDS) Be a Sign of Child Abuse?
Scroll to top