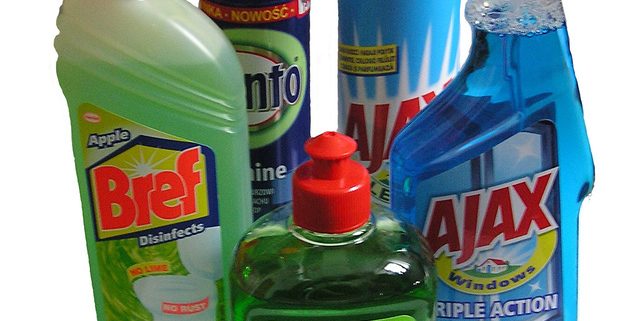 Following the commission of a crime, perpetrators may attempt to clean or remove blood from the crime scene, clothing, and other surfaces. Traces of blood found on a suspect’s clothing, items belonging to a suspect, or found in the crime scene may play a significant role in the development of a case. Presumptive tests for blood are a common means of identifying latent, or hidden, bloodstains and may include tests such as luminol or Bluestar Forensic®. Bluestar® has been shown in previous research to be a powerful tool for the identification of latent bloodstains, allowing for more sensitive detection of diluted blood when compared to luminol. Additional studies have been conducted using Bluestar® and have highlighted the need for studies in which the effects of various cleaning products on Bluestar® are studied.

Each sample was prepared by dropping one droplet of blood from a platic pipette 5 feet above the tile. The resulting bloodstain was approximately circular, and was allowed to dry for 1 hour before sample preparation continued. After drying, a 79 mm diameter circle was drawn around the droplet. Eight tiles were prepared for each cleaning product, for a total of 24 tiles. OxiClean® and Arm & Hammer® cleaning products were prepared according to manufacturer’s instructions. The Lysol® product was already in a liquid state, and thus required no preparation. After preparation of the cleaning products, each tile was cleaned with its designated cleaning product. Tiles were cleaned with a toothbrush for 1 minute in circular motions, and then wiped with a paper towel to mimic a “hasty” cleaning. Following cleaning, no blood was visible on any of the tiles. Tiles were then treated with three sprays of Bluestar® in a darkened area. The darkened area used was a household garage, with the garage doors doors closed, lights shut off, and partly cloudy daytime conditions outdoors. Upon spraying the Bluestar®, a photograph was taken of each sample. Photographs were taken using a Nikon D5600 DSLR camera at a 10 s exposure time at a distance of 2’ 2”.

Images were uploaded into ImageJ to allow for the subsequent quantification of chemiluminescence. RGB values were determined for each sample’s regions of interest. Four regions of interest were defined per sample, with one falling within the circle that had encompassed the bloodstain and three falling outside of the bloodstain area. RGB values were converted to a brightness value. Simple statistical significance tests, i.e. paired t-tests, were performed to compare the mean RGB values of the untreated areas, i.e. blood free and uncleaned, and treated areas, i.e. blood applied and cleaned. The treated areas of the three products were also compared.

Following a crime, a perpetrator may attempt to clean up the scene, clothing or other relevant items. It is therefore important for investigators to understand how different cleaning products may affect the usefulness of presumptive tests such as Bluestar Forensic®.