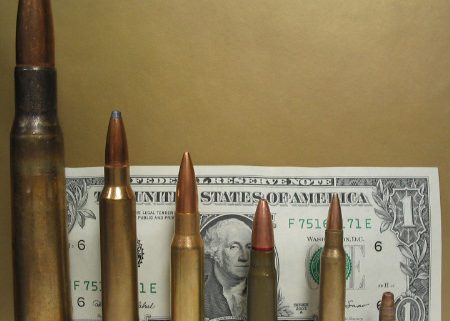 Scanning electron microscopy with energy dispersive x-ray analysis (SEM-EDS) is a common method of gunshot residue (GSR) analysis. GSR is identified based on morphology of the particle as well as chemical composition. Namely, the particle must be composed of lead, barium, and/or antimony. However, with the advent of non-toxic ammunitions, in which the toxic metals of traditional ammunition formulas are replaced with non-toxic compounds, these three metals may no longer be the only indication of a GSR particle. For example, the lead styphnate present in most traditional primer compositions is replaced by non-toxic formulations containing elements such as strontium, potassium, silicon, and titanium. Thus, GSR particles originating from non-toxic ammunitions may contain any of these elements. This presents an additional challenge in the identification of GSR particles, in that GSR particles must be able to be distinguished from particles originating from other sources containing similar elements, such as road flares. The purpose of this study was to demonstrate the potential to distinguish GSR originating from different brands of non-toxic ammunition from one another as well as distinguish particles originating from an environmental source from the ammunition using SEM-EDS and principal component analysis (PCA).
Samples were analyzed either as primer only or as intact ammunition. Primer samples were created by disassembling the ammunition so that only shell casing and explosive primer remained, i.e. removing the projectile and smokeless powder. Primer samples were fired using the slide and barrel of a decommissioned Glock pistol, with the barrel cut short. The barrel was shortened to avoid contamination from the barrel. Samples were fired by pulling back the firing pin and allowing it to strike the primer. The firing assembly was aimed downrange toward two carbon adhesive tabs, which were placed perpendicular to the firing, 15 cm downrange, and used to collect GSR. Five rounds of each ammunition type were fired, with new carbon tabs collected for each firing. After all rounds for a particular ammunition were fired, the exhaust fan in the firing range was turned on to remove any airborne GSR particles.

Intact ammunition samples were fired by trained police personnel using a Ruger pistol. Two carbon tabs were placed 15 cm downrange, with one perpendicular and one parallel to the firing trajectory. A third carbon tab was placed 10 cm downrange and parallel to the trajectory. Tabs were placed parallel rather than perpendicular in this phase to account for the extra force exerted by intact ammunition due to the presence of the propellant. With the extra force, tabs placed perpendicular are likely to have GSR particles embedded deeply in the adhesive rather than at the surface. Therefore, tabs were placed parallel to ensure that GSR particles remained on the surface of the tabs. Five rounds of each ammunition type were fired, with new carbon tabs collected for each firing. After all rounds for a particular ammunition were fired, the exhaust fan in the firing range was turned on to remove any airborne GSR particles.

The environmental sample was generated from the burning of a road flare. The flare was burned outdoors in a fire pit, with carbon adhesive tabs held 10 cm above the burning flare to collect particles.

Samples were analyzed by SEM-EDS. Samples were scanned for spherical particles indicative of GSR, and elemental profiles were obtained for the particle. If the elemental profile differed from the background, the area was marked a region of interest, and the elemental profiles of all visible particles were gathered. 30 regions of interest were located on each carbon adhesive tab. Carbon, oxygen, and copper were excluded in the final dataset due to their common presence in all sample spectra. EDS spectra for all particles observed for one firing event, i.e. particles found on the two tabs obtained from one firing, were averaged to produce an average EDS spectra for each firing event.

The authors note observable differences between manufacturers in the number of particles deposited. For example, Magtech Clean-range and Blazer® Clean-fire produced more particles relative to the other ammunitions. For most samples, there were fewer particles detected in the intact ammunition samples compared to the primer samples, 51-75% less particles. The authors attribute this to the force at which GSR particles are ejected. Primer samples exit the barrel with lower force, whereas intact ammunition GSR particles exit the barrel with a higher force. The higher force propels the particles further, beyond the position of the carbon adhesive tabs.

As seen in Figure 3A within the study, samples were distinguishable in the PCA scores plot. Ammunitions were successfully distinguished from the road flare sample. Most samples had tight clustering of firings for each ammunition, resulting in discrete groupings. Once again, overlap was observed between Winchester WinClean and Winchester Super Clean NT®, as well as spreading within these samples. The spread was attributed to differences in the elemental profiles between firings for the ammunition. PC 1 loadings showed Al and Sr weighted positively, while Si, S, and K were weighted negatively. On PC 2, Al and K were weighted positively, and a combination peak of Si and Sr was weighted negatively.

The scores plot for the full dataset can be found in Figure 4A within the study. Ammunitions were distinguishable from the road flare sample based on the PCA scores plot. Most intact ammunition samples were positioned closely to their corresponding primer samples on the scores plot. However, the spread observed in Winchester WinClean and Winchester Super Clean NT® resulted in intact samples positioned further from the primer samples. On PC 1, K was weighted positively, while Al, Si, and Sr were weighted negatively. PC 2 showed positive loadings for Si, K, and Ca, and negative loadings for Al.

Non-toxic ammunitions have led to the need for means of detecting GSR particles originating from non-traditional ammunitions as well as differentiating these ammunitions from one another.

Non-toxic ammuntions may be differentiable based on SEM-EDS analysis. Thus providing a way to determine the presence of GSR generated from non-traditional bullets.

Organization of Scientific Area Committees for Forensic Science Launches its...