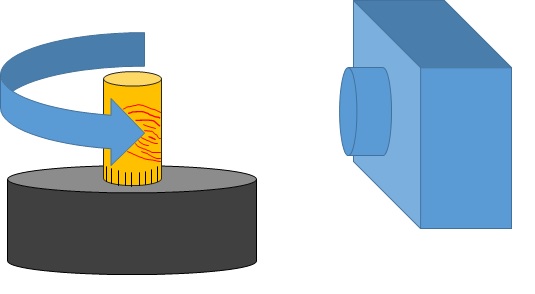 Photographic documentation of latent fingerprints may be used to preserve a record of forensic evidence. However, the fingerprint may be difficult to photograph in cases where the print was deposited on a heavily curved surface, such as the cartridge casing of a round of ammunition. According to the authors, the primary challenges are due to the need to capture a full image and issues in lighting on a reflective, curved surface. A full image of the print may be challenging or impossible to capture. If the print is wrapped around the casing, a portion of the print may be out of view during photographing of the print. To address this issue, the authors of this study explored a method for digital imaging of fingerprints on ammunition cartridge cases.

Brass 0.22 and 9-mm caliber cartridge cases and 12-gauge, non-ribbed shotgun shells were used in this study to allow for samples of varying size and curvature. Only post-fire cartridges and shells were used. Each sample was cleaned prior to deposition of the fingerprint to remove surface contamination, then a single fingerprint was deposited, ensuring a full print that wrapped around the sample surface. Fingerprints were then developed using fluorescent red fingerprint powder. An adhesive, fluorescent scale was applied to each sample, below the developed print, prior to photographing.The sample was then mounted on a rotating stage for photographing, with the camera in a fixed position adjacent to the stage, as seen in the figure below. Using a fixed light source to induce fluorescence consistently, each sample was photographed. (NOTE: Fluorescence occurs when the light from the source hits the sample it will excite the sample to a higher energy level which is called fluorescence. When excitation occurs, the sample will emit light at a different wavelength. The required wavelength of the light needed to excite the sample (i.e. excitation) will vary depending on the sample.) To determine the optimal number of photographs per 360˚ rotation, the number of photographs varied per rotation: 4, 6, 8, 10, 12, 15, 18, 24, and 36 photos/360˚ rotation.

After the sample was photographed, images were processed and combined, or stitched together, using Adobe Photoshop™. Only images from a single rotation were stitched together. Prior to stitching, each image was enhanced by contrast enhancing and image sharpening. Images were then combined to create one full image of the fingerprint on the sample. To do this, the authors used the Photomerge™ function in Adobe Photoshop™, which combines images with overlapping regions. The scale on each sample was used to allow the authors to determine how well the images had been combined; successful stitching would lead to a well re-created scale.

Final images were compared to a reference print, i.e. an ink print deposited on paper, which was obtained from the latent print depositor. Only images that were determined by the authors as a “fair representation” of the fingerprint were considered successful. Final images which did not combine properly, were distorted, or contained artifacts, i.e. results originating from experimental error, were considered unsuccessful stitches. An example of an artifact in this study would be a missing or repeated ridge in the final image of the fingerprint.

Successful image stitching was performed for all sample types at 15 images/360˚ and greater. Successful stitching at 12 images/360˚ was seen for 0.22 caliber cartridges, and no successful stitching was reported at image frequencies below 12. The authors state that the advantage of this method is that it uses “readily available photographic equipment” to capture high resolution fingerprint images fairly quickly. The authors propose that this method may be applicable to the digital imaging of fingerprints for subsequent comparison on various other curved surfaces, such as pens, door handles, screwdrivers, and more. The authors note that the processing and stitching of the images may be cause for concern regarding “photographic truth and reliability” and suggest that further studies be conducted to evaluate how accurately the fingerprint reconstructed by this method represents the fingerprint present on the source.