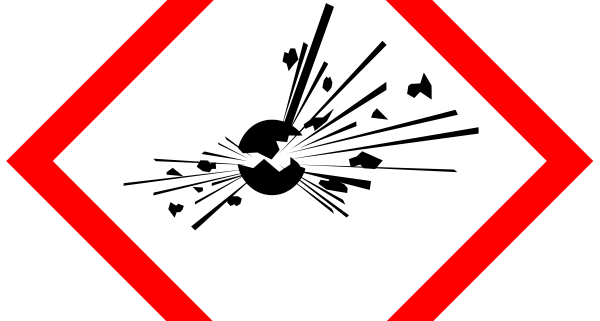 Chajistamatiou, A. S.; Bakeas, E. B. A rapid method for the identification of nitrocellulose in high explosives and smokeless powders using GC-EI-MS. Talanta. 2016, 151, 192-201.

Nitrocellulose is a non-volatile macromolecule, i.e. molecule containing a large number of atoms. Nitrocellulose is a common explosive material, found in smokeless powders as well as in gelatin dynamites. Prior to this study, nitrocellulose had not been detected via gas chromatography – mass spectrometry (GC-MS). To be detectable by GC-MS a compound must be thermally stable and volatile enough to go to a vapor phase easily. Due to its non-volatility, nitrocellulose is not detectable. The authors of this study developed a derivatization procedure to allow for the detection of nitrocellulose by GC-MS. Derivatization is a procedure in which a compound is altered to produce a product, i.e. derivative, that may be detectable when the parent compound is not. The authors propose a three step procedure: breakdown of nitrocellulose into glucose residues by acid hydrolysis, followed by methanolysis and trimethylsilylation (TMS) of the glycoside residues. The resulting trimethylsilylated methyl glycoside derivatives are then detectable by GC-MS.

Samples included three single base smokeless powders, two double base smokeless powders, and two different types of industrial gelatin dynamite. Single base smokeless powder has nitrocellulose as the base charge, whereas double base has nitrocellulose and nitroglycerin. In addition to the seven bulk explosives, standard nitrocellulose was used as a reference material and white crystalline sugar was used to monitor the production of glucose derivatives. To check for false positives, three explosives that did not contain nitrocellulose were also examined: an ammonite, an emulsion, and a black powder. Finally, to examine the effect of the derivatization procedure on other possible components and to check for interferences, four solutions containing mixtures of fourteen standard explosive compounds were analyzed. After derivatizing the samples, they were prepared for GC-MS analysis, where the samples were analyzed in triplicate.

Nitrocellulose was identified by the presence of trimethyl silyl derivatives of D-glucose residues. Derivatives of interest were identified as methyl-2,3,4,6-tetrakis-O-(trimethylsilyl)-D-glucopyranoside at retention time 6.38 min, 1,2,3,4,6-pentakis-O-(trimethylsilyl)-D-glucopyranose at retention time 6.46 min, and 2,3,4,5,6-pentakis-O-(trimethylsilyl)-D-glucose at retention time 6.93 min. The limit of detection for nitrocellulose using this method was determined to be 8.7 μg.
To verify the method, a single base smokeless powder was diluted in acetone so that the sample contained approximately 400 μg of nitrocellulose. The sample was treated with the derivatization procedure described in the paper and analyzed six times to determine whether the same derivatives would be identified each time. All six analyses resulted in the observation of the same TMS derivatives originating from nitrocellulose. To check for false positives, three samples that did not contain nitrocellulose were processed by the derivatization procedure and analyzed via GC-MS. No TMS derivative peaks of interest were detected in the samples, indicating no false positives.

Seven bulk explosives were examined: smokeless powders and gelatin dynamites. Each sample was derivatized, then analyzed in triplicate. In all samples, the characteristic peaks of nitrocellulose derivatives, i.e. the derivatives of interest previously described, were identified. Four solutions containing mixtures of fourteen different explosives were analyzed with and without the presence of nitrocellulose. Nitrocellulose was identified in all samples in which it was present. Nitrate esters, including nitroglycerin, ethylene glycol dinitrate, and PETN, could not be detected after the derivatization treatment. Similarly, nitramines (RDX and tetryl) and peroxide explosives (HMTD and TATP) were not detected after derivatization. Conversely, most nitroaromatic compounds (1,3,5-trinitrobenzene, 2,4,6-trinitrotoluene, 2,4-dinitrotoluene, and 2,6-dinitrotoluene) appeared to tolerate the derivatization process well, with the exception of 4-amino-2,6-dinitrotoluene and 2-nitrotoluene. The authors conclude that, with this method, nitrocellulose can be detected in all cases without interference from the presence of other substances.

Prior to this study, nitrocellulose had not been detected via GC-MS, despite nitrocellulose being a vital component of many several explosive materials.

The presented derivatization method provides a viable method for the detection of nitrocellulose via GC-MS.

Too Much Doubt: After Decades on Death Row, William Montgomery Was Granted a...
Scroll to top