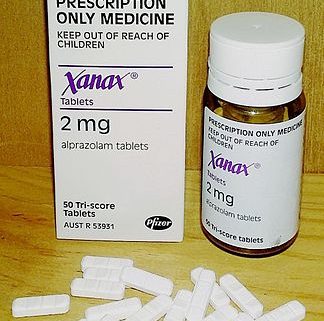 Several classes of drugs, including prescription, may be abused. Benzodiazepines are commonly prescribed for effects such as anti-anxiety, anticonvulsant, and muscle relaxant. Benzodiazepine abuse can lead to intoxication or overdose. The presence of benzodiazepines in blood and other bodily fluids is proportional to the amount of the drug within the body. Some reported methods of benzodiazepine detection in biological samples include gas chromatography coupled with mass spectrometry and electron capture detector. However, gas chromatography techniques require derivatization. Liquid chromatography coupled with either UV detector or mass spectrometry may be used to circumvent this problem. Liquid chromatography uses a column containing liquid, i.e. the mobile phase, to separate compounds. A monolithic column provides faster separation than conventional columns by allowing the use of large volumes of mobile phase for a shorter analysis time. In this study, high performance liquid chromatography with UV detector (HPLC-UV) was used for the detection of four benzodiazepines in blood samples. A monolithic column was utilized in this study.

Clonazepam, lorazepam, midazolam, and diazepam were selected for analysis in this study. Blood samples were processed by liquid-liquid extraction with alkalinization of whole blood, to increase the overall pH to above 7.5, using n-chlorobutane. For HPLC-UV, a mobile phase of phosphate buffer and acetonitrile, with a 65:35 ratio, was used. The UV detector wavelength was set to 220nm to allow the detection of the benzodiazepines. A 20 L injection volume was used, and the total run time was 5-6 minutes. The method was validated based on the following parameters: selectivity and specificity, linearity, limit of detection and quantification (LOD/LOQ), repeatability, interim precision, and recovery.

Specificity and selectivity was determined by analyzing six blank blood matrix samples. No interfering compounds were observed in the blank samples, i.e. no peaks were observed at the retention times of the benzodiazepines. Linearity of the calibration curves was generate to provide a way to calculate the concentration of benzodiazepines and other drugs in an unknown sample. Calibration curves were created by analyzing concentrations of 0.03, 0.05, 0.10, 0.20, 0.30, and 0.60 g/mL for clonazepam, lorazepam, and midazolam, and concentrations of 0.04, 0.15, 0.25, 0.50, 1.00, and 5.00 g/mL for diazepam. The plotted calibration curves each had a correlation coefficient (R2) greater than 0.995, indicating linearity. LOQs were reported in Table 1 within the study, and were determined to be 0.04 g/mL for diazepam and 0.03 g/mL for all other benzodiazepines. Repeatability was determined from the repeated analysis of three concentrations of each benzodiazepine; 0.05, 0.20, and 0.50 g/mL for clonazepam, lorazepam, and midazolam, and 0.50, 2.00, and 5.00 g/mL diazepam. Relative standard deviations (RSD) were determined, and were reported to be below 5% for repeatability for each compound. Interim precision was calculated from the repeated analysis over several days of one concentration of each compound. RSD for interim precision was also reported to be below 5% for each compound. RSDs can be found in Table 1 within the study. A low RSD is indicative of good repeatability and precision. Finally, recovery was determined to be between 80 and 105%. A recovery over 100% may be indicative of error somewhere in the measurement. Recoveries are reported in Table 1 within the study.

While the sample run time was approximately 6 minutes, all benzodiazepines were detected in less than 4 minutes. Retention times were reported as 1.17 minutes for midazolam, 2.14 minutes for lorazepam, 2.34 minutes for diazepam, and 3.12 minutes for clonazepam. The technique allowed for rapid screening for the four benzodiazepines.

Rapid and reliable methods are desirable to reduce backlogs in forensic laboratories.

HPLC-UV with a monolithic column allows for the rapid screening of four common benzodiazepines in less than 6 minutes.

A Research Biologist was Raped and Killed 24 Years Ago. Police Say Attacker...