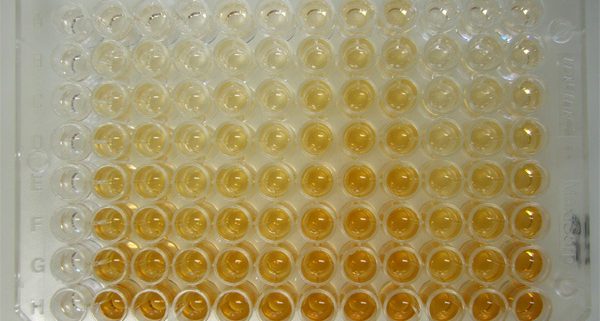 Fentanyl is a potent synthetic opioid, 50-100 times more potent than morphine. Opioids produce effects including analgesia, i.e. the inability to feel pain, sedation, euphoria, nausea, vomiting, and others. Fentanyl has a high addiction potential due to its lipophilic properties, which cause rapid onset and short duration of effect. Fentanyl abuse has escalated in recent years, along with the increase in use of fentanyl analogs.

Enzyme linked immunosorbent assay (ELISA) is a method which may be used to detect drugs, such as fentanyl, in blood and urine. ELISA works by using a polystyrene well plate that is pre-coated with an antibody. An antibody is a protein that responds to a specific antigen. It is like a lock with a key, where the antibody is the lock and the antigen is the key. When the blood or urine sample is deposited into the well, the drug competes with an antigen for antibody sites and binds to the antibodies.2 In other words, the drug is look for the lock at a rate faster than the antigen (i.e. key). An color change occurs in the sample informing the analyst that a change has occurred. The absorbance of each well is then measured to determine the concentration of the drug in the biological sample.2 High absorbance is associated with lower concentrations of drug; drug concentration increases as the absorbance values decrease.

The purpose of this study was to provide validation for the Neogen® Fentanyl ELISA kit based on Scientific Working Group for Forensic Toxicology (SWGTOX) guidelines. SWGTOX guidelines for validation require that the average value, plus or minus two standard deviations, of replicate measurements when determining the concentration of drugs in the sample, which cannot overlap with the average value of measurements for concentrations less than or equal to ±50% of the first concentration. This is what is known as the decision point, which is defined by SWGTOX as “an administratively defined cutoff or concentration that is at or above the method’s limit of detection or limit of quantitation and is used to discriminate between positive and negative results.”3 This decision point can also be described as the value that is at or above the limit of detection for the ELISA that can discriminated between a positive result and a negative result. Two decision points were used in this study: the first was the low control, which is a concentration set near the limit of detection (LOD). The second was the mid control, i.e. cutoff, and is set at the approximate level at which the target drug can be confirmed in the laboratory with another instrument as being present such as a gas chromatograph-mass spectrometer. If a sample’s optical density response, i.e. absorbance measurement, falls between the low and mid controls, then the drug is considered “detected” by the ELISA. If the optical density response falls below the mid control, then the sample is identified as “positive” for the drug.

Neogen® Fentanyl ready-to-use kits were evaluated in this study. A Dynex DSX system was used or automated ELISA processing. Samples were prepared using drug-free human blood and urine, which were spiked with drug standards. Standards included fentanyl and fentanyl analogues: norfentanyl, acetyl fentanyl, 4-anilino-N-phenethylpiperidine (4-ANPP), beta-hydroxythiofentanyl, butyryl fentanyl, and furanyl fentanyl. Whole blood samples were analyzed according to manufacturer instructions; a 1:5 dilution of blood and EIA buffer was prepared prior to processing by the DSX system. Urine samples were also prepared according to manufacturer instructions with one exception. Manufacturer instructions call for no dilution; however, urine samples were prepared as a 1:2 dilution of urine and EIA buffer.
Validation studies were performed to evaluate sensitivity, precision, specificity, carryover, plate drift, robustness, and case sample application. Prior to validation studies, standard curves were prepared for various concentrations of fentanyl in blood and urine to evaluate the instrumental response. Standard curves can be found in Figure 1 within the study.

Specificity was evaluated by analyzing case samples with multi-drug mixtures. Additional drugs included alprazolam, morphine, cocaine, lorazepam, hydrocodone, oxycodone, and others. Multi-drug samples that contained fentanyl and did not contain fentanyl were analyzed by the Neogen® Fentanyl kits. Additionally, other Neogen® ELISA kits, such as for benzodiazepines and THC, were evaluated to determine whether fentanyl produced cross-reactivity with the kit. No cross reactivity was observed in either case. Cross reactivity of fentanyl and fentanyl related compounds, i.e. analogues, was also evaluated. Samples containing a known concentration of fentanyl were spiked with a fentanyl analogue and analyzed. The difference in known and measured fentanyl was used to determine the degree of cross reactivity. Cross reactivity was observed for all analogues in varying degrees. A summary of the cross reactivity can be found in Table V within the study.
Carryover was evaluated to determine whether traces of previous samples carried over into the next. No carryover was reported. Plate drift was also evaluated. Plate drift occurs when replicates differ in signal due to slightly different incubation (i.e. wait) times. No statistically significant drift was reported. Robustness was evaluated by having validation experiments performed on multiple days and by two different analysts. Results were found to be repeatable, indicating a robust technique.

Fentanyl is rising in prevalence in the illicit drug market. Therefore, a rapid, precise, and sensitive technique to detect fentanyl in biological samples is required.

Strengthening Forensic Science: From the Scene to the Courtroom, October 17...

How do Forensic Nurses Determine Knife Wounds?
Scroll to top