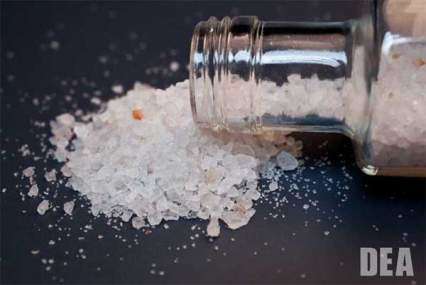 In 2012, poison centers took over 2,500 calls regarding bath salts. There have been incidents nationwide that have been hitting the media, one of the most famous being the Miami Causeway “face-eating” attack that turned out not to be bath salts after all. Then, of course, there’s the attack on the paparazzi by Justin Bieber that was described as bath salt-like. Despite the false claims of violence related to bath salts, there are actual crimes being committed and bath salts are emerging as a hot, new, and VERY dangerous drug.

What are “bath salts”? The main ingredient is methylenedioxypyrovalerone or MDPV. MDPV is thought to inhibit norepinephrine-dopamine reuptake and is therefore a central nervous system stimulant. It is taken orally, intranasally, intravenously, or rectally and the average dose ranges from 5 to 20mg. Symptoms can be felt with as little as 3mg. Onset is rapid, peak is at 1.5 hours, and the duration is three to four hours. One of the big issues is that the bath salts packages can contain as much as 500mg ,so the risk of overdose is very high.

The serious conditions (other than death and coma, of course) that are presenting are the incidence of a condition called rhabdomyolysis, which is the breakdown of muscle that can result in multiple organ failure and compartment syndrome, which is the increase in pressure within a muscle compartment. Compartment syndrome is dangerous because it causes the blood flow to lessen or cease. Entire limbs are lost due to this condition.

Routine drug screens do not detect bath salts and combining them with other psychoactive drugs is common. These patients arrive in the emergency department and the physician thinks that he or she has it figured out when they get the drug test back; but they don’t have the whole story and this can place the patient at risk for complications. Emergency department treatment is mostly supportive with IV fluids, medications for sedation and to control seizures. However, it is always helpful to know what you area dealing with so you can treat appropriately.

Baltimore Police Department and Stingray Use
Scroll to top