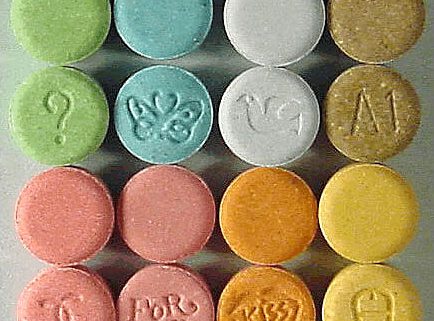 The substance, 3, 4-methylenedioxymethamphetamine (MDMA) was first synthesized in Germany in the early 1900s by Merck and Co. At that time, there was no defined medical use for the product. Through time, studies began to show that this substance produced feelings of empathy, peacefulness, and heightened senses of love and trust. Thus, health professionals began using this substance for those seeking marital intervention and counseling for depression and post-traumatic stress disorder (PTSD). MDMA was and/or is also used for its appetite suppressant and anti-anxiety properties.

In 1985, the FDA labeled MDMA as a Schedule I substance. They deemed it to have no recognized medical use and because of its high potential to be abused, it became an illegal substance. Yet despite this, more and more people began to use and abuse MDMA because they felt it to be “safe,” it had fewer negative effects as compared to other illicit drugs, such as cocaine or heroin. Its use gained momentum at the club scenes in the 1990s and has continued to be abused to this day despite its dangers.

Referred to as ecstasy, the love drug, lover’s speed, X, and Molly (short for molecule), this drug can be used in powder form for snorting or smoking, or most commonly through oral ingestion as a capsule, pill or through parachuting. Parachuting involves wrapping the substance in a pouch, swallowing the pouch, and allowing for slow release into the body. Molly capsules can be brightly colored and are often engraved with symbols or pictures. The effects of Molly, if orally ingested, begin about 30 to 60 minutes after ingestion, peak around 90 minutes, and may last approximately three to eight hours depending upon the user’s metabolism, the purity of the drug, and how much of the drug they’ve taken.

The user may experience a myriad of effects. After ingestion, the initial symptoms may include an elevated heart rate and/or blood pressure, blurred vision, anxiety, and/or excessive sweating. This is followed by increased energy and stamina, appetite suppression, and distortions of time and senses, including altered visual images and increased senses of love, peace, trust, and serenity. A user may find that he or she has developed a tolerance and may need to take more of the drug or use it more frequently in order to achieve and maintain the high that they desire. This addiction is just one of the many dangers of MDMA.

MDMA addiction poses a danger, as life threatening symptoms develop, including irregular heart rhythms, high blood pressure that can lead to a heart attack or stroke, bleeding in the brain, organ damage, and hyperthermia. Hyperthermia is an extreme elevation in body temperature that causes organs to shut down, possibly leading to death.

Molly is a synthesized substance derived from methamphetamine with properties and related risks similar to amphetamines and hallucinogens. While MDMA may not necessarily carry the well-known risks associated with those from pure cocaine or heroin, it does have its own dangers—known or hidden. Unknown to its users, the drug manufacturer may add additional products to the MDMA in order to increase the amount of their batch and, therefore, the profits. Examples of some of these substances identified in Molly have included fertilizers, marijuana, caffeine, methamphetamine, cocaine, and heroin. Each one of these substances not only amplifies the effects of Molly, but also adds its own deadly risks to the “safe” drug. For the user that requires emergent medical intervention, the challenge lies in not only determining how to medically treat the symptoms, but also in identifying, if possible, the substance used, along with all of its drug or chemical additives. There is no drug test that specifically identifies Molly, its purity, potency, or its additives. A blood or urine test can simply identify the amphetamine.

Molly is in the same Schedule I category of illegal drugs as heroin, LSD, and marijuana. In 2010, the U.S. government initiated severe fines and lengthy incarceration for those discovered manufacturing and/or distributing ecstasy. Those penalties are increased substantially if death or serious injury occur to the user of that manufactured drug.

In a recent case at Wesleyan University in February 2015, 11 people were hospitalized after overdosing on Molly. Five students have been arrested for this incident. During the investigation, capsules in the possession of one of those arrested for this incident were tested and found to contain several substances. Unfortunately, once consumed, capsules such as these cannot be tested with specificity to its contents. An unknowing user of impure Molly will not know enough to be aware of it impurities. Charges for one of the students included two counts of distribution of a hallucinogen, two counts of possession of a hallucinogen, possession of a controlled substance, and possession of a controlled substance with intent to sell. Charges against the other defendants included illegally obtaining or supplying drugs and possession of a regulated substance.